c:geo can generate waypoints from the content of your personal note. It also supports a backup of your user-modified or user-defined waypoints in c:geo to the personal note. As both ways are compatible it can also easily be used as a backup/restore of your waypoints of a cache to/from the geocaching server.

This page describes in detail how these feature work.

If your personal note of a cache contains valid coordinates (e.g. N50 10.123 E010 34.876) c:geo will automatically create a waypoint from it in the waypoint tab of this cache.

If for example this is the content of your personal note:

c:geo will automatically create this waypoint for it:

Subsequent coordinates in your personal note will also be transferred to a waypoint in the same way and the waypoint name numbered accordingly.

If the waypoints of a cache already contain the same coordinates as found in your personal note, c:geo will not create a new waypoint for these coordinates as it assumes them to be an unnecessary duplicate in this case. Two coordinates are consideres “same” in this sense when they are identical written in MinDec coordinate format (e.g. N50 10.123 E010 34.876).

You just place one of the following keywords in front of the coordinates:

c:geo will recognize the following keyword formats as waypoint type identifiers (all of them case-insensitive):

Additionally localized waypoint type names (in the language you are using c:geo) will also work, however as c:geo is available in many languages we only list the English keywords here.

As an example look at the following personal note which uses some variants of the above to create waypoints for different types: 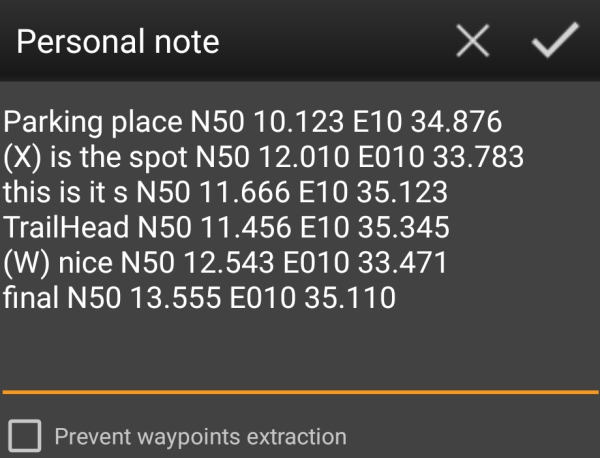 which then automatically creates these waypoints for you: 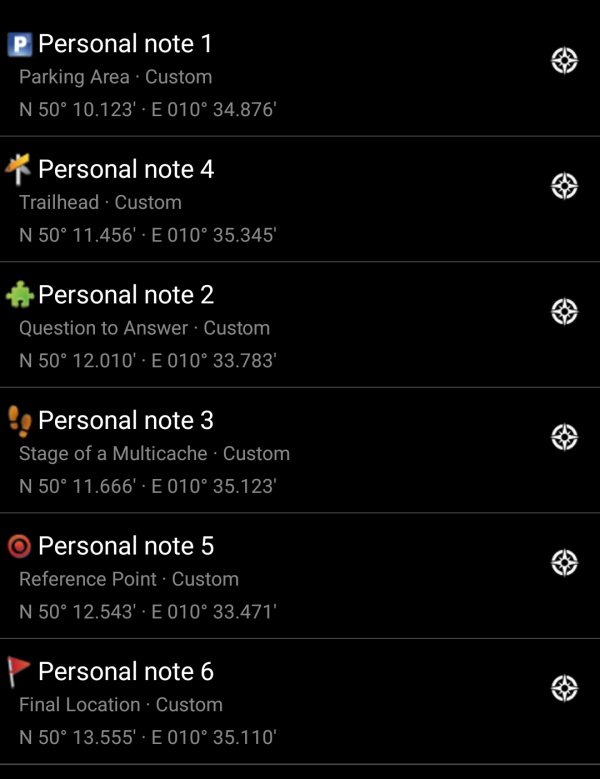 It is possible to create a textual backup of all your user-modified waypoint data in the personal note. You can upload this note to the geocaching server (if the used geocaching provider supports it) and thus easily backup your custom waypoint data. Due to the above described waypoint parsing this data can then be restored to your waypoint list in case it gets lost or is deleted from your local device.

To create the textual backup, use the icon

To refresh the textual waypoint backup, tap the icon

again. To remove it, tap the icon

As an example, when executed on the following waypoints: 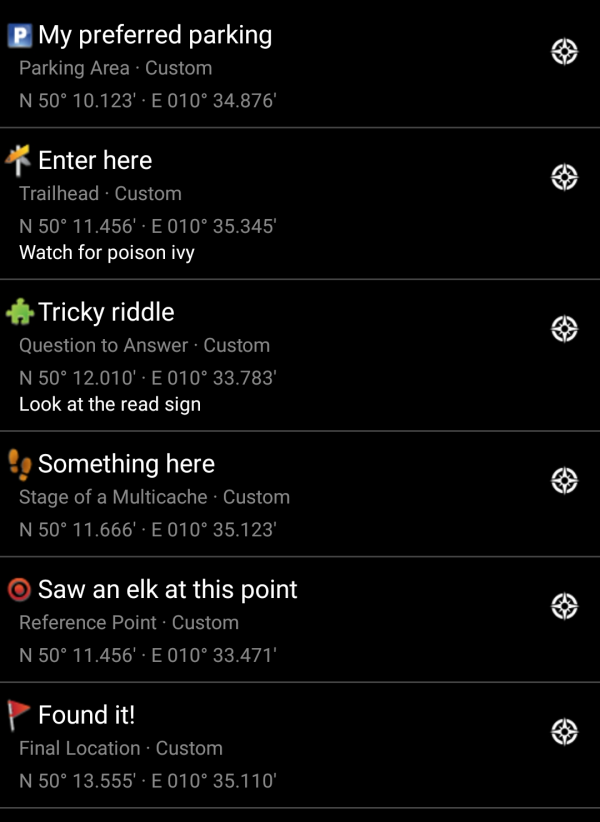 This function will create this textual backup: 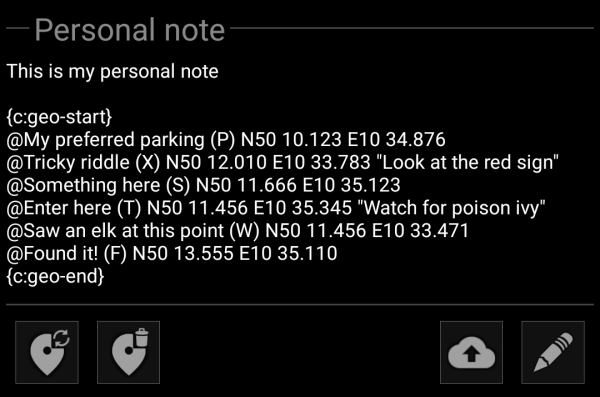 If you upload this personal note to the geocaching server, then delete the cache on your local device and later store it again in c:geo, the waypoints from the personal note will be automatically restored.

To do this, use the following syntax in your personal note:

The advanced format is recognized when it starts with a @ at the beginning of a new line. The following content is parsed:

The geocaches waypoint list is modified with this information as follows:

In case a waypoint is modified, the following rules apply:

This website uses cookies. These cookies are used to store your login status (if enabled) and your personal preferences (such as language selection). There are no tracking cookies or other scripts involved. By using the website, you agree with storing cookies on your computer. If you do not agree please leave the website or delete the cookies anytime you want as they are not essential to use this website.More information about cookies
en/notecoords.txt · Last modified: 2021/11/23 11:09 by lineflyer