For each geocache detail view c:geo offers a tab called “Variables” to note down and perform calculations with formulas and variables you need for this cache. 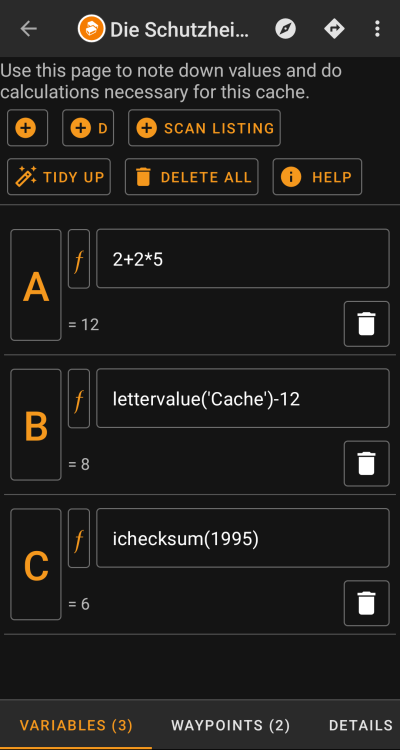 This can come in handy if you e.g. perform a multi cache which requires to collect some values while out in the field and perform mathematical calculations with it to get to the next stage or the final.

You can use this variable tab as a standalone helper to do some calculations or you can also reuse any variable defined here for generating a new calculated waypoint for this cache.

The following sections on this page describe the content and functionality of the variable tab.

On the top of the variable tab you will see a set of buttons offering functions to populate the variable section below: 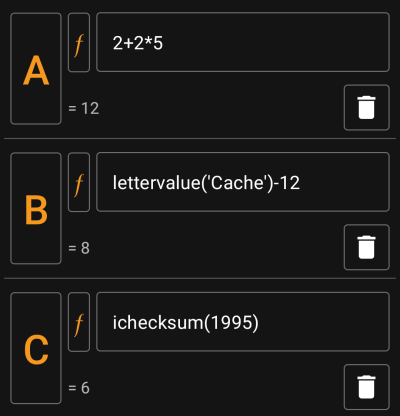 This section allows you the enter the value or formula for the generated variables. You can perform the following actions here:

The text below the value field will show a result preview. This can either be the concrete result of the formula or hints regarding syntax errors or missing values.

The value field of each variable can hold different types of values and also other variables. It supports numerous mathematical operations as well as several (partly geocaching related) numerical and string related functions as described below.

Don't be afraid of the syntax. While it supports rather complex operations, it can also be used for simple and plain calculations as you are used to from any calculator. Some supported functions are probably for advanced users only.

The syntax will be explained in detail in the following sub-chapters. However as a quick overview about what is supported, you will find a list of examples here:

The formula syntax supports three types of values. Typing is loose, in general formula evaluation will try to fit given values as best as possible.

The following numeric operators are supported:

Relational operators like < or == can be used to compare two values with each other. In general, such an operation will return the value 1 if the comparison yields true and the value 0 if it yields false.

For example, the expression 3 < 4 will compute to the value 1.

Functions all start with a letter, contain only letters and digits and have a directly attached parameter list in parenthesis. Multiple parameters are separated using ;.

The following functions are defined:

Variables are used in a formula as placeholders for values. When a formula containing a variable is evaluated, it needs to be passed a value for each of the contained variables in order to be correctly evaluated.

One-letter-variables can just be typed into the formula and will be evaluated along. For example, the formula A + 2 is valid. If A has the value 5, the formula will evaluate to 7.

Variable names longer than one char can be declared in Unix-Bash-Style by prepending their name with $. For example, a variable named Test is can be referenced using $Test. The formulua $Test + 2 is valid. If value for variable Test is 4 the formula will evaluate to 6.

Expressions, which can be concatenated, include e.g. integer digits, variables, expressions in parenthesis and the Overflow character (see next subsection).

In concatenated expressions, the character _ can be used as an overflow sign. It is a placeholder for possible spillovers if numeric variables evaluate to a value with more than one digit, otherwise it is filled with 0.

An example should make the usage clear:

You can specify ranges in formulas using []. This is needed when variables are used in a context where a range of values should be iterated over. A prominent example is the Generate Waypoints function.

Link to anchor on waypoint calc page as soon as its updated to cover waypoint generation with ranges.

An example for a range expression is [0-9]. This specifies a range with 10 values (the integer values 0 to 9).

You may specify consecutive values using , as a delimiter. You may exclude values or value ranges by prepending a ^ to it. Ranges are parsed from left-to-right, giving an order to the elements in the range. For example the following are valid range specifications:

Ranges currently support only positive constant integer values. A range must always be evaluate to at least 1 value and a range may not evaluate to more than 20 values. For example the following ranges are invalid:

A formula may include one or more range definitions mixed with normal other formula parts. For example the following formulas are valid:

You may enter comments into formula expressions using the # character. Comments end at next # or at end of expressions. Everything in a comment is ignored during evaluation. For example:

This website uses cookies. These cookies are used to store your login status (if enabled) and your personal preferences (such as language selection). There are no tracking cookies or other scripts involved. By using the website, you agree with storing cookies on your computer. If you do not agree please leave the website or delete the cookies anytime you want as they are not essential to use this website.More information about cookies
en/cachevariables.txt · Last modified: 2022/05/14 12:00 by lineflyer