You have several options from where to install c:geo as listed in the table below:

During the installation process or when first starting the app (depending on Android version) you will be informed and need to agree, that c:geo needs certain permissions on your device:

Make sure to grant these permissions as otherwise c:geo will not work as expected!

From time to time we will release an updated version of c:geo.

We recommend that you update your installation as soon as possible if a new release is available, as older versions might no longer work as expected (e.g. in case of an urgent bugfix or a server-side change).

Additionally c:geo uses a notification system to make you aware of new versions or temporary problems. You might then see a message like this on your c:geo main screen: 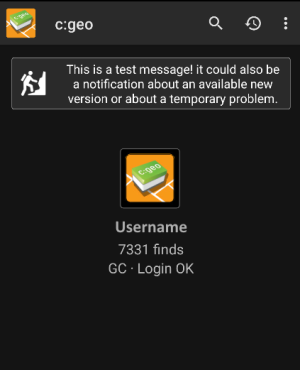 You can tap on the message to get more information (optionally available in case of temporary problems) or be taken to Google Play for updating your installation (in case of an update notification).

If a new version is considered to be ready to be released (a so called “Release candidate”), we might in a first step make it available as beta version to get user feedback and be able to find bugs or problems we did not yet see during the development.

Usually these beta versions are stable, still there is a small possibility that not all functions work as expected. However we encourage you to use them, as this really helps us a lot!

The beta versions are also distributed over Google Play and work seamlessly together with updating from and to our release versions automatically. All you need to do is enable beta testing for c:geo on Google Play by following this link:

After you activated the beta testing, you will receive beta versions alongside with the official versions via Google Play. This means, that you will still receive all official versions but also additionally receive an update if a newer beta version is available. Furthermore you can as a beta tester send us your feedback and problem reports via a dedicated Google Play feedback form.

While you are subscribed to the beta testing Google Play (for some reason) always shows c:geo(Beta) in the store entry, also while we currently might not even have an active beta version but you are on the official release version. If you look into About c:geo you can check if you are currently using a beta version: If there is a suffix -RC in the version number, it is a beta version.

Check the development section of our homepage to learn more about development versions and our so called nightly builds.

This website uses cookies. These cookies are used to store your login status (if enabled) and your personal preferences (such as language selection). There are no tracking cookies or other scripts involved. By using the website, you agree with storing cookies on your computer. If you do not agree please leave the website or delete the cookies anytime you want as they are not essential to use this website.More information about cookies
en/installation.txt · Last modified: 2021/01/23 22:34 by lineflyer